What foods can help improve my rheumatoid arthritis?

Foods that are high in omega-3 or omega-6 fatty acids can help with your rheumatoid arthritis (RA). They can improve symptoms such as tender and swollen joints and morning stiffness. They may also decrease your disease activity.

Studies found that omega-3 and omega-6 fatty acids found in fish oil help reduce RA symptoms. Fish oil is available as a pill supplement or directly in seafood. Before you start taking dietary supplements such as fish oil, talk to your doctor.

Other healthy foods that are high in omega-3 fatty acids are: 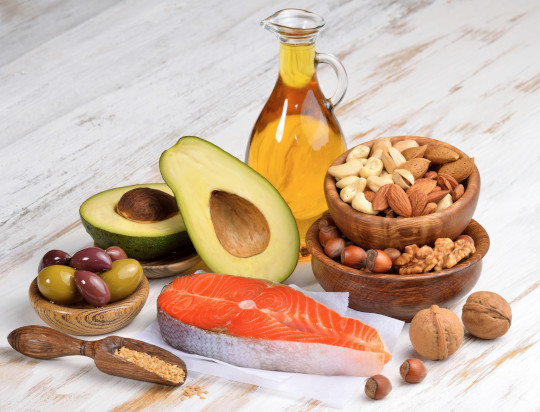 The Mediterranean style diet encourages these foods. It has more fish than other diets. It is also rich in olive oil, nuts and seeds, vegetables, fruits, and whole grains. It limits saturated fats and red meat. Experts have studied this diet and say it is a healthy, too.

Next Topic »
Does carvedilol lower the chances of heart attack and stroke if I have heart failure?

Rheumatoid arthritis (RA) is a systemic, chronic inflammatory disease that affects 0.5% to 1% of the United States population.1 It is characterized by the swelling of synovial membrane tissue in the joints, morning stiffness lasting longer than an hour, and is typically a symmetrical polyarthritis.

Multiple studies2-14 have demonstrated that omega-3 fatty acid supplementation (eicosapentaenoic acid (EPA) and docosahexaenoic acid (DHA)) results in improvement of the number of tender and swollen joints, duration of morning stiffness, physician and patient global assessment, grip strength, C-reactive protein (CRP) levels, and decreased use of non-steroidal anti-inflammatory drugs for patients with RA. The studies ranged from 14 to 67 patients who had a mean duration of RA of more than 10 years, over 12 to 52 weeks of supplementation, and varying dosages of EPA (1.7 – 4.6 g for 65 kg subjects) and DHA (0.18 – 2.5 g for 65 kg subjects).

Anti-inflammatory foods with fish oil have also been found to ameliorate the symptoms of RA and disease activity.15 Sixty-eight patients with RA followed a normal Western diet or an anti-inflammatory diet (AID)  of less than 90 mg/day omega-6 fatty acid (arachidonic acid) for eight months. In both groups, patients were given placebo or fish oil capsules (30 mg/kg body weight) for three months in a double-blind crossover study with a two-month washout period. Using the American College of Rheumatology (ACR) 66-joint count for swelling and 68-joint count for tenderness, the greatest improvements occurred in those taking fish oil on AID (37% improvement, p<0.001). At three months on fish oil, 38% of AID patients and 24% of patient on a Western diet achieved the ACR 20% improvement criteria (p<0.01).

A systematic review has shown that there are limited studies or no advantages on the benefits of vitamins A, C, E, ginger, or turmeric in patients with RA.16 A systematic review of randomized controlled trials (RCTs) showed no effect of turmeric (5 RCTs, n=356) or curcumin (14 RCTs, n=988) on inflammatory marker levels, including CRP, high-sensitivity CRP, interleukin-1, interleukin-6, and tumor necrosis factor.17

A national survey also showed that omega-6 fatty acids are found in food already present and common in our diet such as chicken, potato and corn chips, nuts, and seeds.19

As the current evidence supports the benefits of omega-3 and omega-6 fatty acids supplementation, the Mediterranean diet (MD) may provide these extra nutrients that Western diets lack.20 The Mediterranean diet is an eating model based on the dietary patterns of countries surrounding the Mediterranean Sea.21 Its key components are its high monounsaturated/saturated fat ratio and high intake of plant-based foods.  The MD incorporates seafood as a main source of protein, which provides omega-3 and omega-6 fatty acids. In a Swedish study22 of 51 patients with active RA with at least two years’ duration, 26 patients were randomized to the MD and 25 patients remained on an ordinary Western diet for 12 weeks. Patients on the MD diet had a decrease in disease activity index (DAS28) of 0.56 (p<0.001), improved physical function using the Health Assessment Questionnaire (HAQ) by 0.15 (p= 0.020), and an increase in vitality by 11.3 (p=0.018) measured by the quality of life survey (Short Form-36). The 0.15 improvement in physical function reaches close to the minimal clinically important difference23 of 0.22 on HAQ. However, the Mediterranean diet has not been shown to lower the risk of incident RA.24